Despite a protracted dispute between winger, Denny Solomona, and his team, Castleford Tigers, Sale Sharks have reiterated that they are still very much interested in signing on the winger to their side. 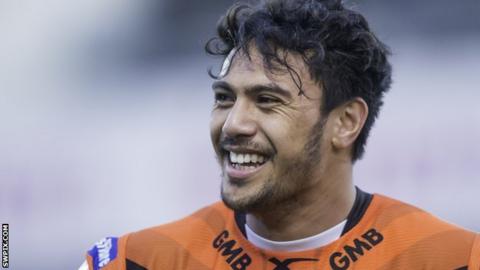 Solomona had joined Castleford Tigers just last year, 2015 from London Broncos but may be facing legal action from his team having failed to report to training before the season.

The 2016 season had seen him score 42 tries, which includes a record 40 tries in the Super League.

The confirmation concerning Sale’s interest in signing Solomona was made by Sale’s director of rugby, Steve Diamond. Speaking to BBC Sport, Diamond had said,

“Denny Solomona has resigned from playing rugby league and us, and many other clubs, are interested in signing him,”

“He’s got a friendship with [Sale centre] Sam Tuitupou and he’s been to have a look around and at this moment that is where we’re at with it.”

In October however, Steve Gill, Tigers Chairman had said that they were not interested in selling Solomona. Addressing his comment, Diamond had added,
“There are no governing body registrations between the sports,”

Rumors making the rounds had it that Sale also had plans of signing England and Bath’s half-fly, George Ford for the next season and the Sale boss also addressed the rumors, saying that they had no authority to discuss or talk to any players until the 1st of January.

He however noted that Sale needed at least four or five players, who were better than they ones they have currently, and that they were searching for World class players to join them for the next season.